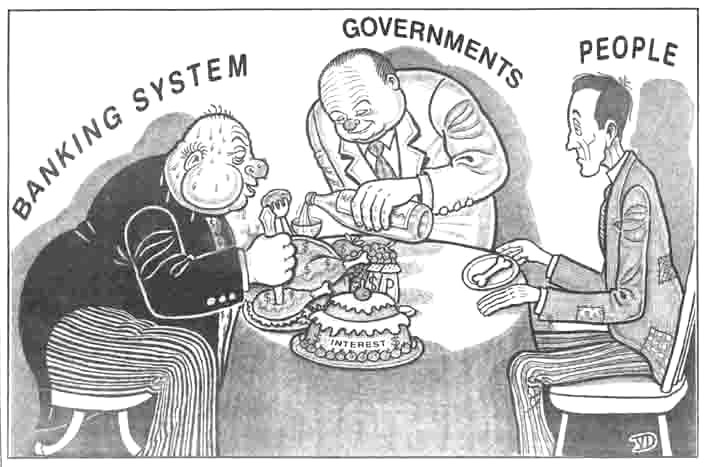 None are more hopelessly enslaved than those who falsely believe they are free.

Below is the nine step process bankers have used to enslave us all with nary a peep of resistance until recent times. Hopefully recognition of this process can help us to free ourselves from the grip of bankers that wish to financially destroy us all.

(1) Teach lies as truth like “markets are free” and “we need to spread democracy to the rest of the world.” Plant agent provocateurs in all movements of resistance like OWS to discredit these movements whenever possible.

Bankers teach lies like “free markets exist” throughout all business curricula taught in the institutional academic system. When Central Banks set artificial interest rates, this means the free market is not setting interest rates. Bankers are rigging stock markets, real estate markets, currency markets, and commodity markets all for their benefit only and to the detriment of all other humans on our planet. Furthermore, if you study democratic principles and whether governments that claim to be democracies actually abide by these principles, you will discover that most every “democratic” government operates on a fascist platform and not a democratic one. Stating that a free market co-exists in a country in which a Central Bank retains the monopolistic power to set interest rates is as impossible a relationship as the physics maxim that states two objects cannot occupy the same space at the same time.

Furthermore, bankers use the lies they teach in school to further other lies like the existence of Capitalism. Without free markets, Capitalism cannot exist. If free markets do not exist anywhere in the world because Central Banks, and not the free market, set interest rates, then by logic, Capitalism cannot exist. Yet, I’ve met brainwashed subjects at Occupy Wall Street protests in Hong Kong that argued that the basis of people’s economic suffering today is Capitalism and that Communism is the answer to the world’s economic problems. This false belief also allows wretched misanthropes like former Fed Reserve Chairman Alan Greenspan to deflect blame away from himself and write stupid articles full of lies like ”Don’t Blame Capitalism For All This Income Inequality”, an article in which he argues that capitalism and free markets exist should not be blamed for today’s global economic inequities between the bankers and the “have nots”. This typical reverse psychology ploy is one that banksters are notoriously fond of. By stating that you shouldn’t blame “capitalism and free markets” for global economic failures, Greenspan knows that since people don’t trust him, that they will fall into his trap and believe the opposite of what he says – that capitalism and free markets are responsible for the creation of massive global income inequities today even though neither “capitalism” in its purest sense nor “free markets” exist anywhere in the world. These clever psychological ploys also allow Greenspan to write the lie-filled article, “Fed Didn’t Cause the Housing Bubble”, and still have a large percentage of the masses gobble up and digest this disinformation without question like it was their daily breakfast cereal.