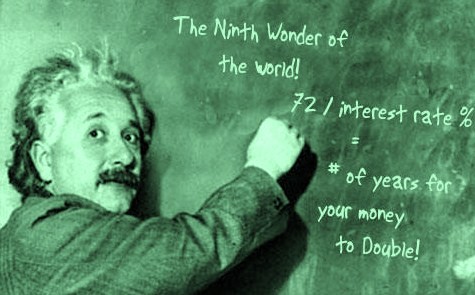 Mail Från Lars Olsson i Life in the Antfarm – FOFOA
If you believe that 2+2=4, then you should believe the following. Compound interest at 2% is a miniscule interest charge measured by today’s standards. Compounding the interest charged on a single unit of money can be written as follows: money-amount * 1.02 * 1.02 * 1.02 …. (adding another term for each year) …. and on and on. That is, if you can place your faith in mathematics and calculations and really “believe” that the calculator will return a correct result when you punch the buttons. We reckon our current time since the long ago birth of a civilization some 2000 years ago. History tells us they had money then. A functioning economy of sorts. Mediterranean trade. Payments for goods. Money of gold and silver. If any man would have placed only a fraction of his purse at interest, his descendants would be wealthy beyond imagination, and the world have been hollowed out.

Let me show you. Open the calculator function under Windows. If you run Apple you are smart enough to figure out a substitute on your own. You’ll find the calculator under Accessories. Set the “View” to Scientific. Got that! If not, that’s ok too, but you probably shouldn’t be reading this. On the keypad, punch in 1.02, then hit the “x^y” button, then on the keypad punch in 2000, then hit “=”. The display now shows you a large number. This is the multiplier for some amount placed at 2% interest for 2000 years compounded annually. On the keypad hit the “*”, then punch in 0.01, then hit “=”. Now the display shows you what one cent ($0.01) would have turned into. To make this a little easier to view, hit the “/” key, the on the keypad punch in “1”,”Exp”,”12″,”=” to get the answer in trillions of dollars. Yes. The calculator really does say that $0.01 placed at 2% interest for 2000 years turns in to $1,586 trillion, or $1.586 quadrillion, or a hundred year of US GDP. If you don’t like 2%, change it. If you don’t like 2000 years, change it.

What the previous exercise shows is that a purse of silver was certainly not placed at interest anywhere in the world 2000 years ago, and allowed to compound at 2% interest, since that numerical representation of wealth would today dwarf all known hoards of “money”, electronic or otherwise. So compound interest is not a sustainable operation spanning millennia. Compound interest applied to any finite system will grow out of bounds, which is what we are experiencing today. The current “money” system, which is engineered with “debt/credit” as its foundation has breached its sustainable limit. Stimulating the economy without addressing the fundamentals of the “money system” decay will not restore economic prosperity. Money at interest, does not price risk in venture. A functional society requires an efficient “money system”, but “money” can be made available through means other than extending fractional reserve privilege to the banking class and putting a price on the existence of money.