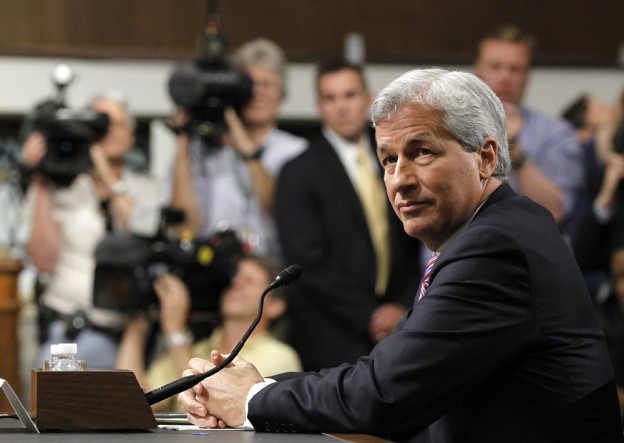 This is modest and common in the bankster’s domain.
The first collapse in Western finance was due to OTC derivatives.
The final collapse of this drama will be as a product of FASB’s permitting the valuation of bank paper at any level the bank wishes with no consideration of a market worthiness or viability.
The sin of the OTC derivative is greed without any concept of ethics.
The sin of FASB is weakness in the face of political pressure and the selling out of their souls and purpose to the sociopath devil of Wall Street.
FASB is supposed to be the gatekeeper of transparent and fair auditing.
All major banks’ balance sheets are sick cartoons.
All sovereigns are broke.
QE to Infinity is the only tool capable of kicking this can.
In the final analysis, the can will be kicked.

In a presentation in March, JPMorgan Chase said it had a recovery plan in place and said it was ordered by regulators. The presentation was organized by Harvard Law School and was closed to the media at the time, but is now available online.

Here’s the BEST part of the JPM document.

It’s easy to see on the PDF:
http://www.law.harvard.edu/programs/about/pifs/symposia/europe/baer.pdf

Go to page 9. Under the wipeout scenario JPM describes a $50 billion trading loss turning into a $200 billion loss as soon as the FDIC takes over. Why… ? Because JPM says they would expect the FDIC to immediately writedown JPM’s assets by an additional $150 billion.

Holy mark to bullshit. Jamie Dimon just admitted to the world that JPM is mis-marking assets to the tune of $150 billion.

It gets better. Go to page 10. The chart shows that they only have $184 billion in equity, minus the $50 billion loss, minus ‘the $150 billion fdic reality adjustment’, which leaves them in a negative equity position of (-$16 billion).

So, we can extrapolate that without this phantom loss of $50 billion, JPM’s real equity position is just $34 billion currently, not the $184 billion on their books.